Have you signed up for the 100th blog giveaway?

I was trying to clean up my sewing space, ya know, so I could get to my sewing machine again ;-) I've had some Pezzy Print scraps sitting around since I made my flying geese mini.

In any case, I whipped them up into this cutie pin cushion. 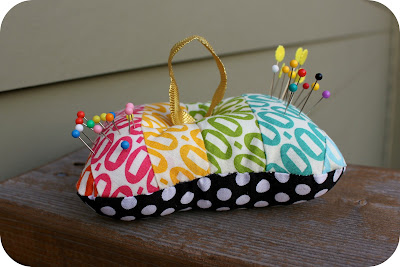 I know what you're thinking. That looks like procrastination sewing.

Well, you're right. I dunno, this just needed to be made before any legitimate sewing. It did let me clean up my pins. That's something, right? 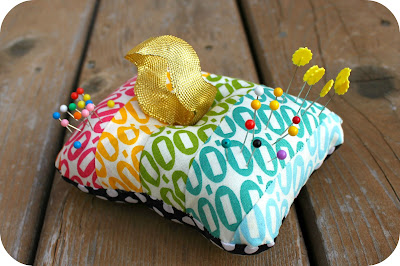 I sewed a bit of giant gold ric rack in the middle, because I like a good handle on a pin cushion. I wish I'd worked one into my giant cupcake pin cushion. From now on, I'll make them all with handles. 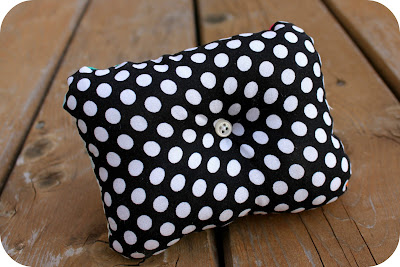 I thought it needed to be squished in the middle like a doughnut, so I used a button and a giant scary upholstery needle to sew the top tightly to the bottom with some hand quilting thread. I broke the thread once. I probably should have used button thread, but I doubled up the strands and got it to hold. 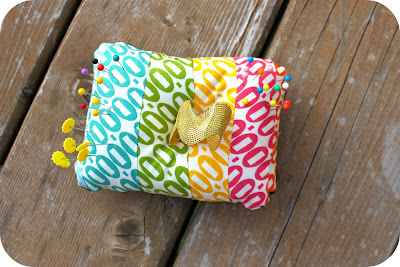 This was a super fun instant gratification project. Don't you love those? I'm dying to make a pin cushion from Penny's tutorial, though. A gal can never have too many pin cushions, right?

Here's to a little instant gratification in your sewing as well!

I'm linking up with Somewhat Simple and Wild West Thursday.