Taadaa! My first quilt in ten years, and I knocked it out in a busy two months, like a boss. I couldn't have done it without the generous folks at Stitch Lab donating fabric specifically for Central Texas Wildfire victim quilts. 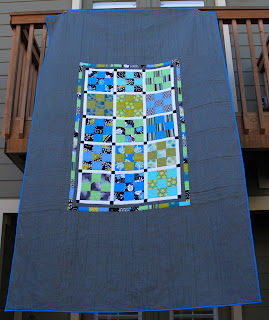 I had to lint roll the quilt to get some threads off. The sewing room is a little chaotic right now. It looks like someone just came back from Houston with fabric and tools and just dumped it all in there before having an all night binding fest . . . oh wait. 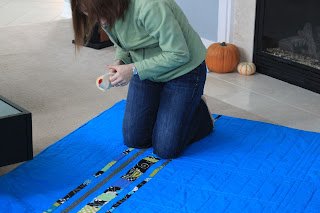 I tried to pick scraps with coordinating colors. I also just had to eyeball the remnants and try to determine biggest square I could make from the smallest piece I had. From there I just threw together some nine patch blocks the old fashioned way. It was good practice for seam spinning. 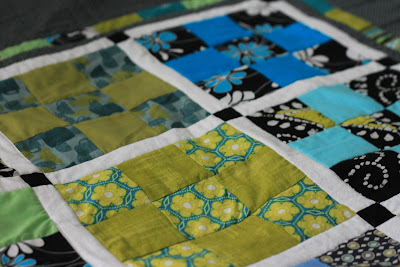 The piecing process was a little dicey at times. I ran into a math error or shrinking problem when I went to size up my original white border fabric. I was short. This resulted in another trip to Hancock Fabrics, since I needed some budget friendly yardage. The dark print I settled on incorporated the block colors pretty well. 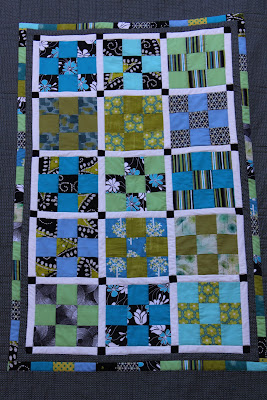 By the time the top was done, I was so not interested in doing the long, pieced strips for the back's vertical lines. I pushed through, though. I initially thought the turquoise would be too bold, but I was wrong. I love it! Go bold or go home. 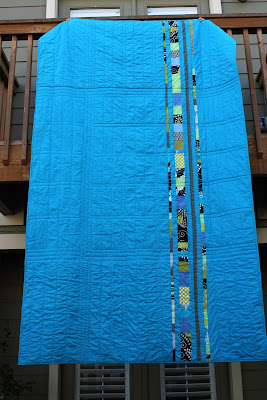 Once this bad boy sandwiched and squared, I was pumped to put on binding. I needed to do it in one night, though, because I wanted to hand it over at the Austin Modern Quilt Guild meeting the next day. I followed Susan Schamber's three-part crafty approach to quilt binding, but I found that I really should have just used a quarter inch seam allowance when I attached it to the sandwich top. Oops, after that I wasn't able to catch the binding everywhere when I stitched in the ditch on the front. 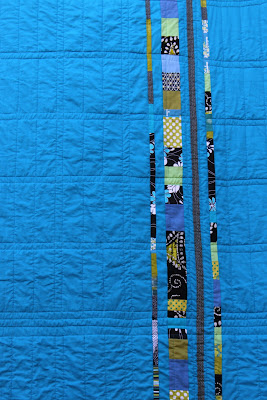 Arg. At that point it was like 3:30am, so I just went back around the quilt and stitched all around in the middle of the binding. This twin quilt was 104" by 65", so that took a little while. I fell in bed at about 4:30am. I'm sure no one else has ever stayed up that late trying to finish a project by a deadline, right?

Ultimately, I'm very pleased. I feel great to have made something that's going to help a family rebuild their lives, and I'm thrilled to be quilting again.
Posted by Claire Jain at 3:42 PM